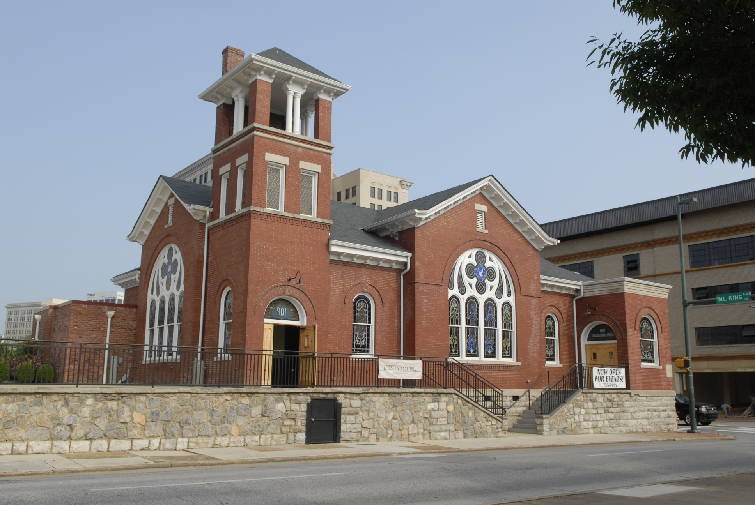 1  Bro. Reverend Dr. Jesse B. Barber, Sr. – The guiding force in establishing the graduate chapter with the last available syllable, “Psi”.  He was pastor of the Leonard Street Presbyterian Church, now known as The Church of Reconciliation on Grove Street.  The Newton Community center was guided to fruitation under his leadership.  His son, Jesse Barber, Jr., was valedictorian of Howard High School, Class of 1941.  He was a physician.

2  Bro. Dr. James Monroe Bynes, Jr. – Bro. Bynes was the youngest of the charter line.  He was an alumnus of Hampton Institute in Virginia and has just completed his dental degree at Meharry Dental School, He and his wife, Sallie, resided on Vine at Hawthorne Street. Mrs. Bynes, a member of Alpha Kappa Alpha, was a home economics teacher at Howard High School.

3  Brother Dr. William Burnell Davis, Sr. – Bro. Davis was a practicing dentist in Chattanooga.  He was a graduate of Fisk University and Meharry Dental School.  He, his wife, Bennie, and family resided on Ivy Street, across from the Orchard Knob Reservation. His son, W. Burnell Davis, Jr., was an active member of Psi Lambda until his death in 2008.  Bro. Davis, Jr. was initiated at Alpha Chi Chapter at Fisk University in 1936. His sister, Tardiefay Davis Dorsey, was an alumna of Fisk University, where she was initiated into Pi Chapter of Alpha Kappa Alpha Sorority.  She was the first “Miss Fashionetta”, presented in Chattanooga.

4  Bro. Reverend H. E. Johnson served as pastor of various churches in the Chattanooga area.  He was assigned to an out of town congregation two years after the chapter was established.

5  Bro. Dr. Edel Fernandez McIntosh – Bro. McIntosh hosted the first interest meeting. Like Bro. Davis, Sr., he was an alumnus of Fisk University and Meharry Medical College.  His wife, Mattie, was his college sweetheart and was an elementary teacher at the East Fifth Street Elementary School.  They resided on East Eighth Street, between Palmetto and Central Avenue.  Bro. McIntosh, Jr., their son, was an initiate of Alpha Chi chapter at Fisk University.  He completed his medical training at Meharry Medical College.  He practiced medicine at Martin L. King and Magnolia Street for many years.

6  Bro. G. Hirman Moores _ Bro. Mores was in attendance at the first interest meeting.  He was an educator in the School System of Chattanooga.

7  Bro. Reverend Dr. G. A. Stams was a minister and a leading physician in Chattanooga.  Bro. William Hight, Psi Lambda’s oldest member, who was initiated at Bluefield State College, was delivered by Bro. Moores

The following graduate chapters were established in 1926:

Alpha Delta Lambda of Memphis and Alpha Mu Lambda of Knoxville were later chartered in 1930.